by Steve Raphael; Special to the Jewish News 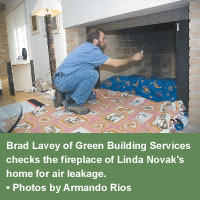 Energy shortages, soaring fuel prices and the green revolution have converged to create a relatively new service to combat energy waste in the home – the energy audit.
In a matter of a few hours, a trained inspector using state-of-the-art equipment can walk through and around a home and determine how energy efficient it is.
“The audit gives homeowners a road map specific to their home that addresses the exact site of the problems and the cost to repair energy leaks,” says Brian Halprin. Halprin is co-owner of Green Building Services PLLC in Bloomfield Township. He also owns Halprin Construction Inc. in Bloomfield Township.

Real estate broker Linda Novak learned that her rebuilt 4,200-square-foot Franklin home wasn’t very energy efficient. She says she was “horrified” at electric bills in excess of $800 per month. Her gas bills weren’t much better. Novak hired Halprin, her long-time friend, to perform an energy audit.

A complete energy audit entails surveying the entire building envelope – the separation between the interior and the exterior environments. The envelope serves as the outer shell to protect the indoor environment as well as to facilitate climate control. The physical components of the envelope include the foundation, roof, walls, doors and windows.

An audit alone doesn’t save energy but is merely the first step toward energy efficiency, says Energy Star, created by the United States 16 years ago as a means to set standards for energy efficiency in appliances. Appliances carrying the Energy Star logo can save on average 20 percent to 30 percent on energy bills. The standard has been adopted worldwide.

Individuals can perform a simple energy audit themselves or hire a professional for a more thorough assessment. Taking just five minutes and with 12 months of utility bills in hand, a homeowner is able to compare his home’s energy efficiency to similar homes nationwide and get recommendations for energy-saving home improvements from the Energy Star website. The homeowner also would need the ZIP code, age of home, square footage and number of occupants to ensure a complete audit.

Costs vary, but for the most part homeowners bear the entire cost of the audit. Michigan Consolidated Gas has a limited energy audit rebate program of $250 to 100 MichCon customers who make the changes recommended by a contractor. The state of Michigan in 2007 offered a $250 tax credit for doing an energy audit.

Halprin says his prices vary based on the complexity of the home, but 35 cents per square foot is a frame of reference. He says owners can recoup the investment on their upgrades within five to seven years.

“Each home is made up of multiple systems,” notably heating, insulation, ventilation and lighting and “all have a relationship to each other,” says John Eckstein, owner of Performing Home, a Palo Alto, Calif.-based Energy Star approved vendor. “It is by paying close attention to the relationships between these systems where the greatest opportunity for improving the performance of our homes lies.

“Taking a holistic, or whole-house approach” to construction and remodeling is a new concept, he adds. “The holistic approach is not about solar panels or rainwater catchment systems or wind turbines. It’s about the ductwork, air sealing and insulation.”

Energy audits have been around awhile on the East and West coasts and only now are catching on in the Midwest and Michigan.

A lot of the problems Halprin finds result from inadequate insulation, old windows, inadequately ventilated roofs and high-energy-use appliances. He encourages homeowners to develop a proactive maintenance program, making sure the furnace is clean, the filters are good and vents are cleaned out, for example.

Halprin began Novak’s energy audit in late October and continued the audit through early November because of the home’s complexity. He kept her abreast of his findings along the way.

He uses all the new and spiffy tools, notably a blower door that is nothing more than a huge fan that sucks the air out of homes. An infrared gun finds weak spots in the insulation that can account for more than 50 percent of heat loss.
“The size of the home and its complexity and proportions determines how much energy loss there is and the cost to plug up the leaks,” Halprin says.

His house, 1,800 square feet with a 1,000-square-foot basement, is easier to evaluate than a larger house built in the 1960s with many additions over the years.

Novak’s house has two different heating systems to accommodate the additions, a courtyard, a lot of roofs, angles, shapes, crawl space, partial basement and jogs in the walls. The home also has a 7×14-foot exercise pool that chews up energy.

Halprin and Lavey have visited the house twice, “measuring the height of the windows and crawling around in the crawl space, sealing the house and sucking out the air to determine where the leaks are,” Novak says.
Halprin uses a software program that works in coordination with a national data base of appliances and their efficiencies, similar to Energy Star. Novak’s audit will cost $2,100.
Content © 2008 Detroit JN Online

FEATURES: Energy Audit – A scientific look at your home can save you a lot of money.